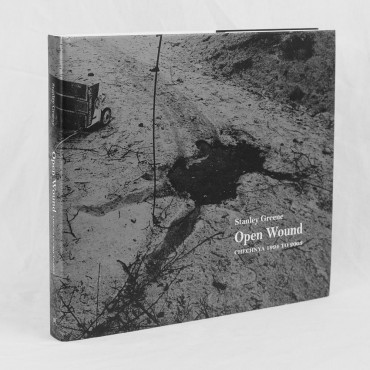 Book sold out
American Photography Awards ; selected as one of the ten best photography books of the year.

The collapse of Russian communism in 1991 resounded to the shudder of an empire. Soviet imperialism and empiricism was dead and lands, nations and peoples would henceforth be free from the tyranny of the communist diktat. But it also sounded the death knell of a small, impoverished, forgotten land-locked state in the Caucasus which had the misfortune to be of geopolitical importance.

Chechnya reiterated its largely Muslim claim to independence from Russia, one they had first made 150 years before. Then, of course, they had no knowledge of the importance of oil; they were peasants hurling clods against the cavalry of Imperialist Russia. They do now. A blitzkrieg was launched against the Chechens in 1994, so devastating as to reduce Grozny, the capital, to a city of rubble and rats, the Dresden of the Caucasus. There followed the systematic rape and murder of the people - men, women and children - by the Spetznatz, the Russian special forces.

But the Chechens would not die. What is left in Grozny, the capital of Chechnya, is a vision of hell in the eyes of the survivors - pictured by Stanley Greene - that seems impossible to contemplate. The horrific politics of Yeltsin and Putin are reasonably comprehensible, given their roles. But what do the mothers of the Russian soldiers who have done this to Chechnya feel now about their sons?

Stanley Greene's photographs in Open Wound are so powerful as to make these our responsibilities. He is unashamed to use guilt, with his painter's eye, to relate the deeds of men in Chechnya to our own conduct.