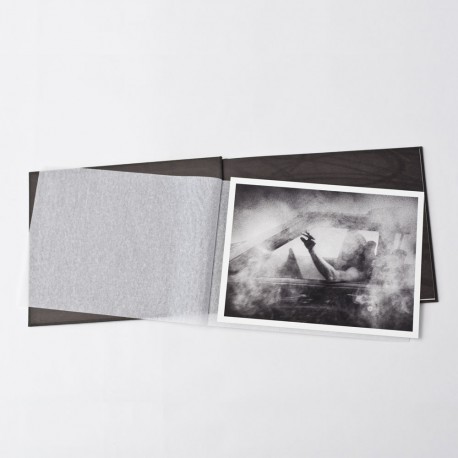 This copy is accompanied by a signed print

The book signed and numbered:

'Exhausted, placated, perhaps both. Behind the car windscreen, through which the photographer gently catches them unawares, they are sleeping. A grey light, filtered, a visible texture, specks of brightness, everything is softness. Left by themselves, they seem even younger than they are, off in a world of their own, the reflections separating them from our world even more securely than the glass of the windscreen. The explanation lies in the other images, the ones that set the scene. The viewpoint broadens out to a coniferous forest that shimmers in the light, to large areas of deserted nature, to these northern territories which breathe fully and whose nakedness, which can be exhilarating, is no less painful for teenagers than the boredom that lies in wait. They need to release the energy within them and explode this boredom eating away at them. And so, they get hold of these ‘tractor-cars’, these cars transformed into agricultural tools; they tinker with the engines to unleash the speed and the screech of tyres, they use excessive amounts of oil, all in order to indulge in the intoxication of speed.'

These photographs were taken in Skane County, Sweden from 2011 to 2012.