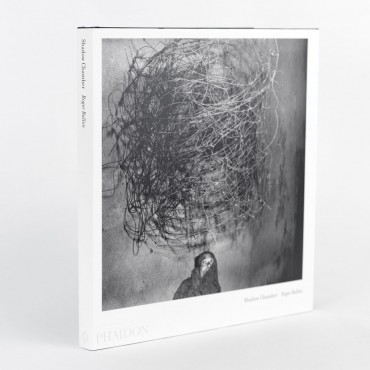 With Shadow Chamber, Roger Ballen explores the underbelly or the "shadow chamber" of existence.

"World-renowned and award-winning photographer Roger Ballen, who is known for the social comment of his previous publications Dorps, Small Towns of South Africa, Platteland, Images from Rural South Africa and Outland, now explores in Shadow Chamber the underbelly or the "shadow chamber" of existence. He takes major leaps forward into a metaphoric dimension with multiple conscious and subconscious meaning. He does this in an, as yet unseen, and entirely unique way. With Shadow Chamber he creates a way of seeing that makes an important and historic contribution to art photography.

His photographs are striking, ambiguous images of people, animals and objects posed in mysterious, cell-like rooms that occupy the grey area between fact and fiction, blurring the boundaries between documentary photography and art forms such as painting, theatre and sculpture.

The results are completely abstract and not defined by the origins or specific location of the characters he photographs. Ballen focuses on the interactions between the people, animals and objects that inhabit mysterious rooms - the shadow chamber. The rooms are unsettling and strange: their walls are covered with scribbled drawings, stains and dangling wires, the floors are strewn with bizarre props and artefacts. Dogs, rabbits and kittens wander into the frame or are stuffed into unlikely containers. Figures hide away in boxes, crouch behind overstuffed sofas and squat with their shirts pulled over their heads.

The humans and animals in Ballen's photographs appear isolated, estranged and lost, yet strangely empowered at the same time. The resulting images are surreal and intriguing, and powerful disturbing psychological studies.

As Robert A Sobieszek writes in his introduction to Shadow Chamber: "To discern fact from fiction in this work may be simply impossible; to tell acting from real life may also be; to bother with such discernment may not be only futile but missing the point."

Ballen regularly shows his work in galleries and museums around the world, and his photographs are included in the collections of the Museum of Modern Art, New York; the Centre Georges Pompidou, Paris; the Victoria & Albert Museum, London and the Stedelijk Museum, Amsterdam.

He has won numerous awards, including the prize for Best Photographic Book of the Year at the PhotoEspana festival in Madrid and was named Photographer of the Year at the inaugural Rencontres de la photographie d?Arles in France in that same year. There will be a traveling exhibition of the works from Shadow Chamber and Outland starting in September 2005 which will be shown in important venues worldwide. The work will be exhibited in South Africa at The Durban Art Gallery, Sasol Museum, Oliewenhuis Bloemfontein, as well as the Everard Read and Heidi Erdmann Galleries.