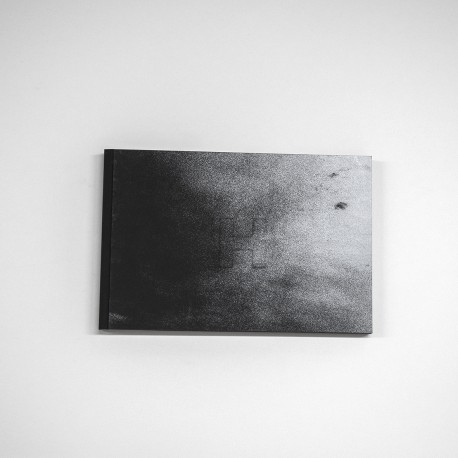 This book is a distorting mirror and where I never thought I would put words, I found my first images.

H is an introspective work, a work of memory in the Sahara, between Reggane and Tamanrasset, where nearly sixty years ago, the French army conducted nuclear tests.

A look at mobility, the search for faults, scars, in nature, on people, from France to Algeria, from the city to the desert. Under the effect of the heat of the explosions, the Sahara bears as stigmas black patches of vitrified sand, under the effect of radiation, the faces of some witnesses have melted in the same way, assaulted by cancers

In his silvery, rough and contrasting images, inhabited by elusive shadows, taken in what seems to be the urgency of a mad rush, everything seems to be on the verge of being swallowed up. Gregory Dargent brings a radiant and raw light from the black into the landscapes, dark deserts and tormented skies, faces and scenes of everyday life. Images overexposed and then over-darkened to reveal invisible frames, shutter speeds are slow, evanescent movements such as heat trails in the desert, and negatives themselves are sometimes distorted by chemistry to orchestrate the gaze around the mutated material rather than around the subject.