> LIMITED EDITION>Limited edition A propos d'Anders Petersen, a film about with
Reduced price! 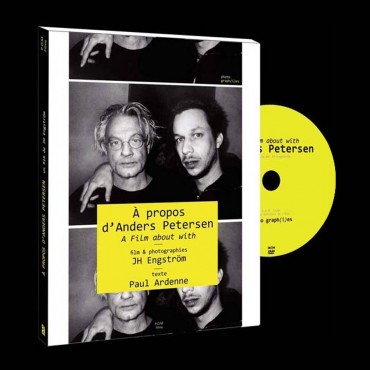 Limited edition A propos d'Anders Petersen, a film about with

The film gives us the opportunity to meet Anders Petersen in his private life and as an artist. Questioning the emotional ups and downs in day-to-day life, as well as the individual longings and weaknesses most of us can identify with.
The position of director JH Engström expresses itself through persistent inquiries of his mentor’s methods, actions and behaviour during the process of making the film. In his process trying to emancipate, he discovers both affection and worries for his friend and the values of individual integration, the consequences of life/work are dealt with without diversity.

The film offers a wide range of “stills” chosen from Anders Petersens enormous production of work through the years. We get to follow how his photography efficiently develops, the further he reaches in his artistic development, into the even more private and physically unrefined.

JH Engström about the film:
“It’s a very straightforward story where I trough my camera have followed a person and a photographer I like a lot. It tells about Anders as an artist, but the fact that we know each other well of course colours the film. It became impossible to separate my friend from the artist Anders Petersen”.